The neurobiology of behaviour: what drives individual choices?

An overview on the neurobiology of behaviour and decision making, and how we can translate this into effective interventions to elicit behaviour change, with reflections from Professor Huda Akil. This blog is part of a series for the 2019 Rosenthal symposium: Behaviour change to improve health for all.

Determining the neurobiology of behaviour

Professor Akil began by describing how human brain biology has evolved to promote and sustain seeking behaviour as a response to limited resources in the environment. This has significant implications for how we think about behavioural change in modern life.

The brain is where our genes and the environment meet—where nature and nurture interact. Our social setting can affect our brain circuitry and biochemistry, which are also influenced by genetic controls. These neurobiological mechanisms can, in turn, affect behaviour. A lot is known about the molecules, circuitry, and neural networks involved with certain behaviours such as addiction, feeding, stress and reward. This body of knowledge can be used to better inform assumptions and hypotheses when developing new behavioural change interventions.

But additional research is still needed. We do not fully understand whether what we learn in one context can be generalised and applied other contexts. We also do not fully understand individual differences in brain biochemistry related to vulnerability, sex, age, and environmental context, which play important roles in effectuating behavioural change and developing interventions. 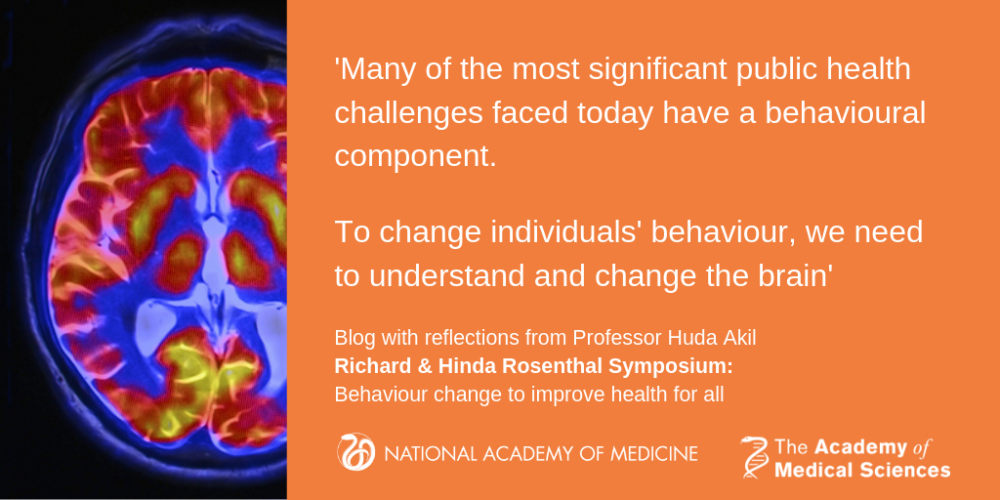 New understanding into the brain biology of behaviour can offer innovative insights about how environmental cues can be altered to promote healthier decisions or and habits. Professor Todd Hare of the University of Zurich, who delivered the session’s keynote speech, focused on how to promote healthy choices while supporting individuals’ preferences. Highlighting food choices as an example, Professor Hare explained that if people are asked to consider the healthiness of food options before making a food choice, the number of people that choose an unhealthy (but tasty) option decreases compared to groups that only think about the tastiness of the food, or made their decision by thinking as they naturally would. By imaging the brain when a person is asked to think about specific attributes of food before making a selection, we can see that activity increases in the regions of the brain involved in self-regulation and control. We also can examine how different regions of the brain are influenced by, and interact in response to, specific factors when making a food choice. It is critical to understand these interactions in order to make predictions about behaviours.

Professor Munafò explained how cognitive neuroscience techniques can help identify environmental characteristics that influence certain behaviours. This information can be used to reverse engineer what we learn in laboratories to design behavioural population-level interventions that target environmental cues.

Professor Munafò described studies on design characteristics, such as product packaging or the shape of drinking glasses, and their impact on the brain and behaviour. For example, studies tracking eye movements have found that smokers actively avoid looking at health warnings on packaging. Similarly, studies using EEG have found that smokers have reduced and delayed emotional reactions to health warnings. Other studies have examined how the design of a drinking glass can influence alcohol consumption. His research indicates that the rate of alcohol consumption increases when using a curved glass compared to a straight glass.

These studies underscore the potential for laboratory studies to clarify the mechanisms that underpin environmental influences on our behaviour, which could inform population-level interventions that support effective public policy. For example, is it advisable to use positive message framing – such as highlighting the benefits of not smoking rather than the dangers of smoking – to increase smoker’s attention to health warnings and encourage behaviour change? Would requiring establishments to serve alcohol in straight glasses lead to reduced rates of alcohol consumption at a population level? 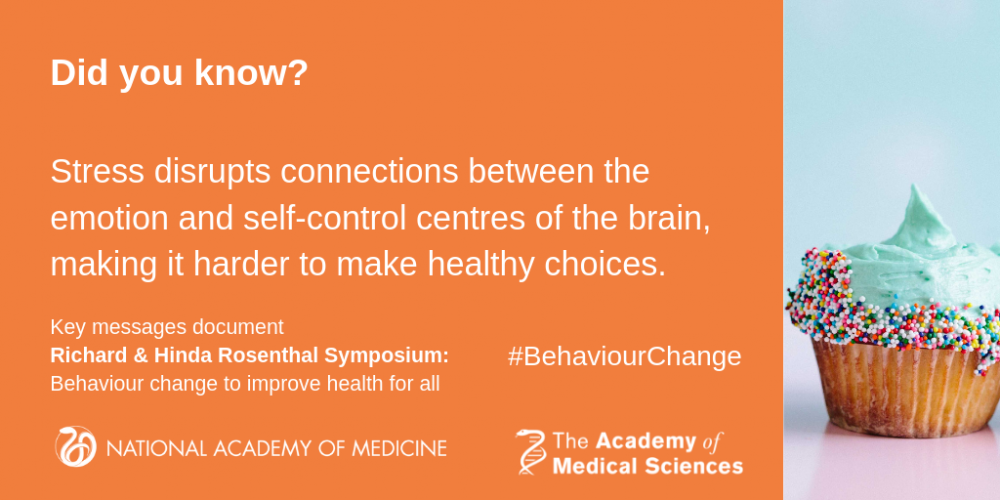 The role of early childhood stressors on behaviour and health outcomes

Professor Greg Miller, Northwestern University, began by highlighting that many of the most common, disabling and expensive health problems begin during childhood and adolescence. These problems have both genetic and environmental causes. The logical conclusion is to target children’s lifestyles to improve health outcomes, but evidence indicates that benefits of such interventions tend to be short-term and outcomes tend to be worse for low socioeconomic status populations.

Miller observed that recent studies highlight how cultural environments and contextual stressors (both social and physical) affect brain development and the crosstalk between the brain and peripheral systems – for example, between the reward and threat network and immune signalling. This can affect the downstream biology of children in profound ways. For example, children who are exposed to social and economic adversity in the early years of life show increased susceptibility to chronic disease in the fifth and sixth decades of life. Some studies suggest that this early adversity may change the cells of the immune system at a genomic level, resulting in a pro-inflammatory tendency that probably contributes to diseases of aging.

Interventions that aim to reduce the impact of early-life stressors on brain development and physiological response may help promote resilience and healthier lifestyles and improve long-term health outcomes. In one study, 11-year-old Black children and their primary care-givers were recruited from low-income families to participate in 8 weekly sessions with a community facilitator. These sessions emphasised how to manage adolescent transitions, racial and socioeconomic stressors and how to leverage family and peer relationships to create positive, cognitive and emotional behavioural change. Follow-up studies 10 to 15 years later found that participation in the program was associated with improved health, including lower rates of metabolic syndrome, compared to children exposed to similar levels of poverty.

These studies tells us the brain is a key interface for environmental influences on behaviour in childhood and later-in-life. Further study of this interface offers opportunities for future insights and interventions. The power and reach of simple interventions, particularly in childhood, upon ongoing physical health has the potential to be profound.

Behaviour change interventions are relevant to mental health as well as the physical health of individuals and populations. Cognitive training consists of mental exercises that can improve cognition in both healthy people and people who have cognitive disorders, such as neuropsychiatric disorders or brain injury.

Cognitive training is known to improve cognition and functional outcome in those with mild cognitive impairment (the early stages of Alzheimer’s disease) and those with schizophrenia. However, study participants often drop out because previously, the process for cognitive training was not enjoyable and so their motivation to continue was poor.

The lab of Professor Barbara Sahakian FBA FMedSci, University of Cambridge, has tackled this problem by gamifying cognitive training to increase people’s motivation to engage with and continue the intervention. Both Gameshow, a training programme for elderly patients with cognitive impairment, and Wizard, built for patients with schizophrenia, have improved cognition and functional outcome in their players. Importantly, people remained motivated to play the games – and therefore continue training – over a prolonged period of time.

This is an excellent example of how understanding why an intervention is effective at a neurobiological level allows us to build and improve on that intervention for the future. It also highlights the growing, key role for technology-based therapies. Going forward, gamified cognitive training could be applied in new ways. Professor Sahakian’s lab have developed Decoder, a game that aims to improve concentration in healthy young adults in the hope that such games could will stop people getting distracted in their day to day work. In the wider research landscape, there are examples of experimental virtual or app-based interventions for phobias, contamination fears and obsessive compulsive disorder. 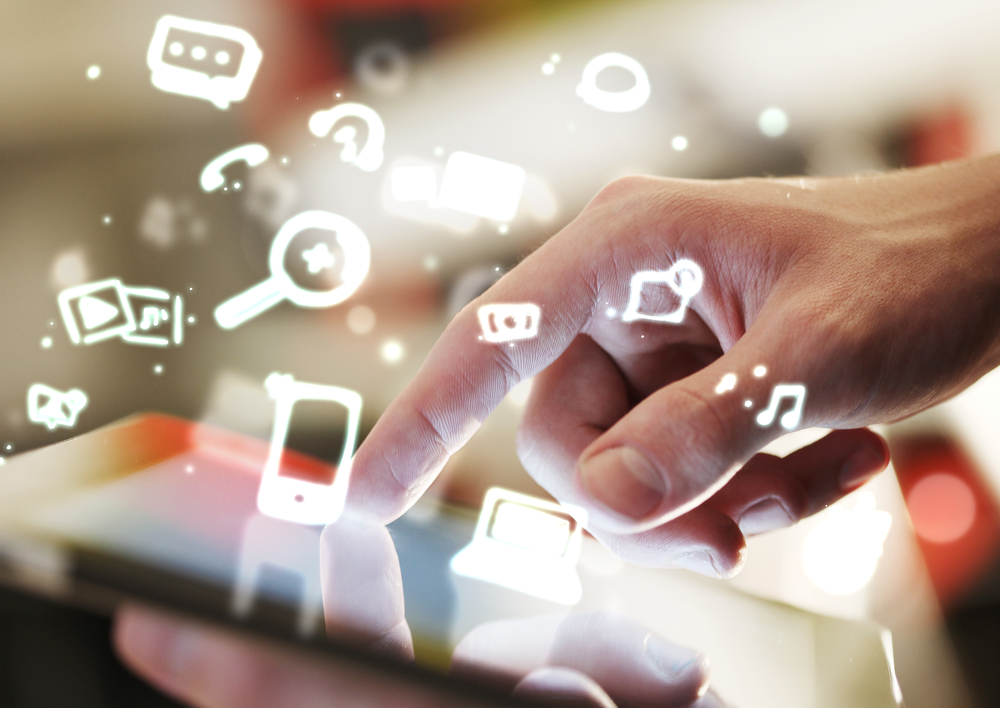